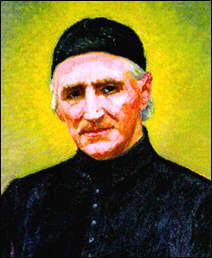 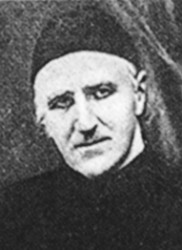 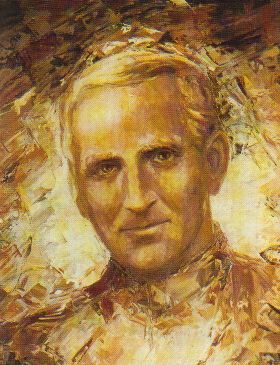 Michael was born on April 15, 1797, the eldest son of Arnold and Gratianne Garicoits, on a small farm in the south of France, near the town of Ibarre, situated not far from Lourdes and from Betharram, ancient site of pilgrimage. His parents had been forced to marry clandestinely, before a recusant priest, because the Revolutionary Terror was persecuting loyal Catholics and their priests even in the remote Basque Country. 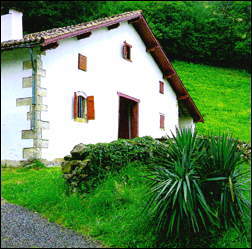 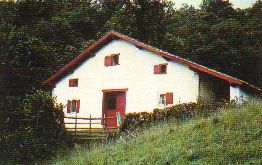 They were poor and Michael was hired out as a shepherd boy to a farmer. His desire to become a priest always met with “No, we are too poor” by his parents, but his grandmother walked 20 kilometers to talk with the Parish Priest of Saint Palais about a solution to the difficulties.

Through his own efforts, Michael earned his expenses for college by working after school hours for the clergy and in the bishop’s kitchen. A hard worker, he kept abreast of his classmates whilst putting in many hours of drudgery before and after school. Despite all this, he was popular and respected by his friends.

He was ordained priest in Bayonne cathedral by Bishop d’Astros, on 20 December 1823. Michael was sent as Curate to Cambo,where he remained two years. There, long before the decree of Pope Pius X in 1910, he became known as the apostle of frequent Holy Communion

By the time of his arrival at the Senior Seminary of Betharram in 1827, he was already an accomplished theologian. The Bishop of Bayonne had entrusted him with the reformation of the rather lax regime at the Seminary. He was also chaplain to the nearby convent of Igon, where he encountered the shock of religious poverty. The close contact with the Daughters of the Cross and their Foundress, Saint Jeanne Elizabeth Bichier des Ages marked a turning point in his life.

When the seminarians were transferred to Bayonne, Michael became the “Rector of four walls,” and knew much loneliness. Gradually the idea of forming a religious Congregation took shape in his mind. From the maturity of his meditations, the founding notion of the Betharramite spirituality was born.

Soon he had attracted priests and brothers to him, founding the Congregation of Betharram in 1835. After ensuring professional and pastoral formation for his brethren, he was to send them on mission work in the parishes of the area. Schools were opened in the Atlantic Pyrenees and then in Argentina and Uruguay.

In 1838, Father Garicoits drew up a constitution largely based on that of the sons of St. Ignatius. Like them, his missionaries were to take life vows and to spread far and wide. Associates gathered round him at Betharram, and all seemed promising, when the bishop disapproved of his idea of founding a new congregation. Not till 1852 was the community allowed to choose its own superior, and even then it was tied down by regulations which hampered its activity. Father Garicoits submitted, but with a heavy heart. He died on Ascension day, May 14, 1863.

His work of Foundation was completed by one of his disciples who was very close to him during the last seven years of his life, Father Auguste Etchecopar, whose cause for Beatification has been introduced in Rome to the Congregation for the Causes of the Saints.
Miracles by the dozens had followed the death of Father Garicoits, and the Priests of the Sacred Heart of Betharram spread in the lands of South America, as well as in France, England and Italy, where they direct teaching activities.

In 1875, after an intervention wholly supernatural occurring in the nearby Convent of Pau through the intermediary of the Arab Carmelite, Blessed Mary of Jesus Crucified, the Society of Priests of the Sacred Heart of Betharram was approved in Rome under Leo XIII.

St. Michael Garicoits, who was at one time spiritual director of the Basque house of the Daughters of the Cross at Igon, received much encouragement in his foundation from St. Elizabeth Bichier des Ages, and he was all his life a close friend of her congregation in the Basque country. Both of them were canonized in the year 1947.