Oh, I have slipped the surly bonds of earth
And danced the skies on laughter-silvered wings;
Sunward I’ve climbed, and joined the tumbling mirth
Of sun-split clouds…and done a hundred things
You have not dreamed of…wheeled and soared and swung
High in the sunlit silence. Hov’ring there,
I’ve chased the shouting wind along, and flung
My eager craft through footless halls of air.
Up, up the long, delirious, burning blue
I’ve topped the windswept heights with easy grace.
Where never lark, or even eagle flew.
And, while with silent, lifting mind I’ve trod
The high untrespassed sanctity of space
Put out my hand, and touched the face of God.
– John Gillespie Magee Jr. 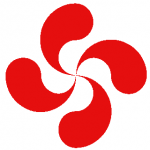 I want to thank all of the you who have come to this service today to show your respect for Dad and for your support for my Mother, myself and our family. This means more to us than you can imagine.

Dad was a first generation Basque American, born to parents who had to move here for a better life from “the old country.” He went through some difficult times growing up, having to live with different relatives. In High School he loved drama and gymnastics. Dad probably would have done well in singing and acting, but since he had to support himself after graduation, he drove a milk truck and then a logging truck before enlisting into the Army Air Corp. After several years dad was discharged and went to work for his Uncle Martin in Reno at the Deluxe Laundry, where he met my Mom.

Ray posing with a Douglas A-26 in Korea.

Later, he was recalled to fight in Korea, and then stayed in the service for an extended period. Retiring from the Air Force to Reno, he worked yet again for Uncle Martin, St. Mary’s hospital and then owned Pink and Blue Diaper Service. Finally he retired to the country, in Fort Bidwell, California.

While all of this seems like dry facts, he had experiences that few of us can match. He was not a rich man, but he was comfortable in the life that he built for himself and his family. The Air Force took us to different locations in the states and overseas, which was a varied and rewarding experience for all of us. After the service years, Dad thoroughly enjoyed camping and fishing. We went on so many camping trips that I have lost track of them. When I hear of some location that now sounds interesting to visit, I think, “Now wait, I think I went there with Mom and Dad as a kid.” 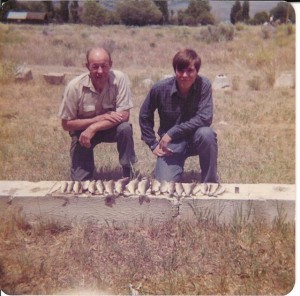 Ray on the left and son Dan on the right.

The best one was a fishing trip out of Ft. Bidwell before he retired there. We both caught our limits at a stream and never met another person all day. I think that this was the most proud, content and happiest that I had ever seen him. Even if we did almost roll the truck off the edge of a hill, since that seemed only to add to the excitement!

When Dad finally did retire to Ft. Bidwell, he was active in the town, belonging to the local VFW post, the volunteer fire department and the senior citizens center. 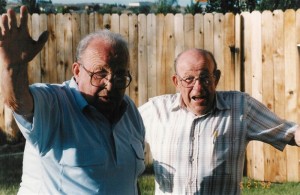 Ray’s brother Peter on the left.

Now, besides helping out the town with his services, this was also an excuse to get out and talk to people. Because Dad loved to get together and party and talk. Give him a Picon Punch at the “Santa Fe” or a highball at a party and you had a friend for life. He loved his Basque Heritage and family and would do what he could to help us in times of need.

Even though he had a difficult childhood, he didn’t let that affect him in terms of caring and loving his family. I think he loved the grand kids the best. They seemed to have a special bond with Grandpa. While he loved to talk, he was modest in certain things. Recently, while looking through his records I discovered that he had been awarded several medals, among them the “Distinguished Flying Cross,” for a difficult mission in Korea.

As you probably all know, Dad had Alzheimer’s, which was as hard, if not harder on my mother, since she was the primary care giver for him. I want to take this time to tell you Mom, how proud I am of you, for enduring the pain of this disease.

Thank you all again. I would ask Pat Jolly to sing “On Eagle’s Wings.” Afterwards, as it was Dad’s wish, we will conclude with a military service led by Commander William Blach.

Ray was born May 30, 1919 in Turlock, Calif. He had been a resident of Amador County for two years. He was a retired Major in the United States Air Force. He served in World War II as a flight training instructor and the Korean Conflict as a Pilot of a B-26 Intruder ( should have been “Invader” ), where he was awarded the Distinguished Flying Cross. Retiring in 1965 after 25 years of military service, Ray moved to Reno, Nev. where he worked for his uncle Martin Etcheto at Deluxe Laundry, and at St. Mary’s Hospital laundry services. Ray owned and operated Pink and Blue Diaper Service for ten years, before retiring to Ft. Bidwell, Calif., where he lived for 16 years.

He was preceded in death by his parents, Joseph and Mathilda Etcheto; sisters Frances Sejas, June Tanner, Marie Etcheto; and brother Jimmy Etcheto.

Memorial contributions may be made to Alzheimer’s Society of Northern California, P.O. Box. 1824, Sacramento, CA 95812. Arrangements by Daneri Mortuary. 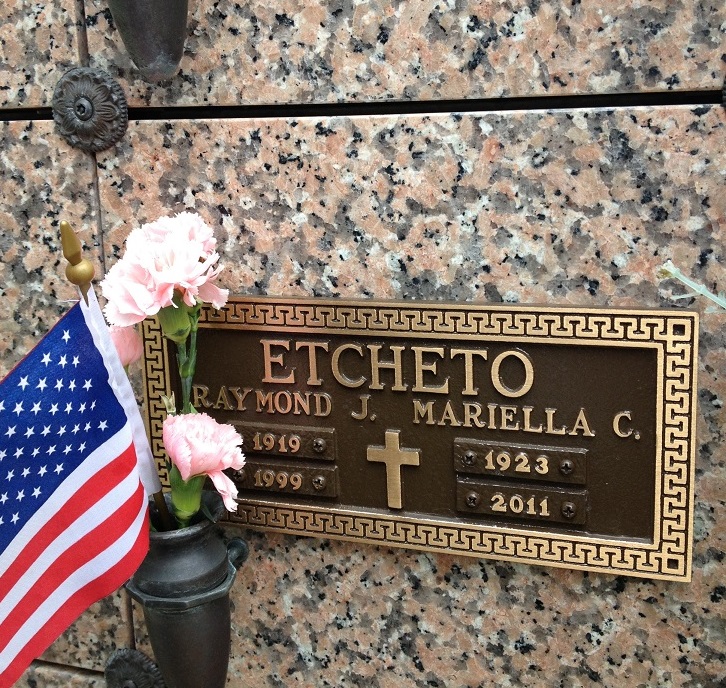