“The proprietor of the Turlock French Laundry and an enterprising and progressive man is Martin Etcheto, a native of Ustarits, Basses-Pyrenees, France, born in March, 1888, where he was reared on a farm. His parents being in limited circumstances, he was early set to work and from a lad helped to support the family. When seventeen years of age, he entered the employ of a nobleman for three years, then he enlisted in the Fourteenth Regiment of Artillery in the French Army from Tarbes, serving for two years. Having served the required time, he was honorably discharged and free to leave his country for other shores.”

“In 1911, Mr. Etcheto migrated to California, choosing San Francisco as his location. He purchased an interest in the Pleasant French Laundry, which he ran for four and one-half years. Selling out, he removed to Reno, Nev., where he worked at stock raising and riding the range for a year.”

“In March, 1919, he came to Turlock and purchased the Tur1ock French Laundry,

then located on North Broadway, and continued the business. It prospered and grew and he found it necessary to secure a new location, so in the fall of the same year he purchased the present location on South First and erected the new building, 25 x 120, installing new, modern machinery for the latest and most up-to-date method of laundry work, having ample boiler and electric power capacity. He is meeting with deserved success and is well satisfied with his venture and pleased with the prospects of the town of his adoption.”

“Mr. Etcheto’s marriage took place in Modesto September 6, 1913, when he was united with Miss Marie Claverie, also born in basses-Pyrenees, where she secured a good education in the public schools. Her father had made a trip to California in former years, but returned to his native land and resided until his death; her mother is still living.”

From the Ellis Island web site, Martin, 23 years old, left Le Havre, Seine-Inferior, France on the 7th of November, 1911, along with his brother Bernard and sister Graciense, both listed as 20 years old. They sailed on the Chicago, built by Ateliers et Chantiers de l’Atlantique, St. Nazaire, France, 1908. She was 9,350 gross tons; 508 (bp) feet long; 57 feet wide, with steam triple expansion engines and twin screws. Service speed was 16 knots and she carried 1,608 passengers (358 first class, 1,250 third class). Built for French Line, French flag, in 1908 and named Chicago. She sailed Le Havre – New York and later Le Havre – Caribbean service. She was renamed Guadeloupe in 1928, and scrapped in France in 1936. 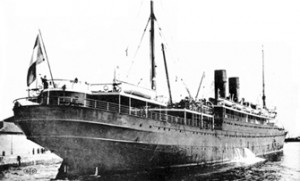 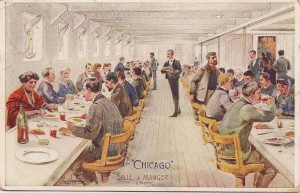 Martin Etcheto, former owner and operator of the Deluxe Laundry here, died Tuesday at the age of 81. A Native of Ustaritz, France, he came to San Francisco at the age of 24, went to work in a laundry operation, and later owned and operated laundries in California before coming to Reno. He had resided here at 1295 Wilson Ave., and had operated the Deluxe Laundry on South Wells Avenue until 1966 when he sold it and went into retirement. He was a member of the Church of the Little Flower congregation. His wife Marie, died in 1959. They had been married 45 years. Surviving are: nephews, Raymond, Peter and John Etcheto, all of Reno; nieces, Frances Sejas of Stockton, Calif., June Tanner, of Sacramento, and several other nieces and nephew in France. A Rosary will be recited at 7 p.m. Friday in the Ross, Burke and Knobel Mortuary. Requiem Mass will be celebrated at 9:30 a.m. Saturday in the St. Thomas Aquinas Cathedral. Entombment will be in the Mountain View Mausoleum. Pall bearers will be: Joe Lembeye, Gilbert Mandagaran, Bernard Etchemendy Sr., Jean Barnetche, Ambrose Arla, and John Sapparrart. Honorary pallbearers will be; Emil Gezelin, Lino Del Grande, Glenn Dory, John Petri, Simon Toulouse, Paul Bernadicou, Gaston Larre, and Martin Indiano. 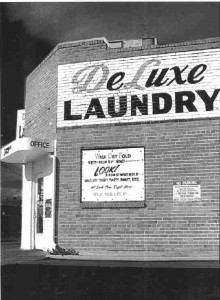 Martin Etcheto opened DeLuxe Laundry in 1943 at 1540  Locust Street.  After World War II ended,  families across the nation took to the highways for leisure and travel.  Roadside motels began to appear all across  America to serve these automobile travelers.   In Reno, motels popped up along 4th Street which was part of  the coast to coast Highway 40, formerly known as the Lincoln Highway.  Commercial laundries such as DeLuxe Laundry played an important role in  laundering their sheets and towels.

In 1950, Mr. Etcheto had DeLuxe Laundry’s new, modern  10,000 square foot facility constructed at 1690 Wells Avenue, one block from  the old location.  The new building  featured steel roof trusses that transferred the roof load to the exterior  walls, eliminating the need for interior support posts.  This created a wide open space for the huge  industrial laundry equipment including a massive boiler.  The building was constructed of Reno brick,  manufactured at the Reno Press Brick Company on west 4th  Street.

When it came time for Mr. Etcheto to retire, he decided  to reward the hard work and dedication of his employee Rosa Kolbet who had  worked for him since the laundry’s early days.   Mr. Etcheto sold DeLuxe Laundry to Rosa and her family in 1966.  They put down $10 and made monthly payments  to him for several years.  Rosa’s son  Richard worked at the laundry and her husband Ralph, (known as Shorty), was a  sheet metal worker by trade who repaired and fabricated many pieces of  equipment for the operation. He came to work at the laundry after his  retirement from the sheet metal industry.   Richard’s son Layne joined the family in business in the early 1980’s.

DeLuxe Laundry remained open until it was sold in 2005,  but after the sale, it sat vacant for 7 years.   In 2012, Haberae Homes purchased the building and began work on Dozen at  the DeLuxe, a project aimed at preserving the original character of DeLuxe Laundry  while giving the iconic building a new purpose. The 10,000 square foot space  was divided into a dozen individual units: ten residential lofts, The Boiler Room Art Gallery and Cafe DeLuxe.