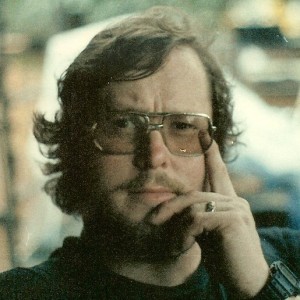 He was a graduate of Wooster High School in Reno, NV where he was a longtime resident. He had lived in CT since 1989, was a musician and an avid woodworker.

Beside his wife, he is survived by a son, Joseph M. Etcheto of Pawling, NY; 2 daughters, Jennifer B. Lowrey of Southington, and Kelly L. Etcheto of Waterbury; brother John Etcheto of Reno, NV; 2 sisters, Dr. Sally Porton of Los Angles, and Mary Jolly of Carson City, NV; and 6 grandchildren.

A memorial service will be held on Saturday, April 23, 2005 at 11 am at the United Methodist Church, Church Street, Woodbury, CT.

I have known for a long time that my father and I were cut from the same cloth. (Or perhaps carved from the same wood?) For the most of my life, in fact, I looked on this circumstance with something akin to dread. How many boys, once they reach their teenage years, still wish to be like their father? So with this in mind the younger me set about being as little like him as possible. Unfortunately, the problem with making life decisions when you’re a teenager is that you almost certainly don’t know the first thing about whatever it is you’re deciding on. Even Mark Twain was quoted as saying; “When I was a boy of 14, my father was so ignorant I could hardly stand to have the old man around. But when I got to be 21, I was astonished at how much (he) had learned in seven years!” Well it took me just a little bit longer to figure things out for myself, but now that I have I am astonished by my father.

As I said, I’ve known practically all along that my father and I have grappled with many of the same demons. All my life I blamed him for that curse, but when he passed it suddenly dawned on me just how many thing we had in common and what that means. We have both struggled with anger overcoming us. We have both felt a profound loneliness and isolation from those around us. Each of us has had a passion for life that we sought to express though creative works. You may be familiar with the feeling; it’s a fire that burns inside you. Those are just words, however, and this emotion is so strong that words fail utterly to express what if feels like, let alone what it might mean. We both sought to control the world around us through sheer force of will. Each of loved one woman, a woman in the light of whom all others become as shadows, and both of us has known the pain of driving away those who mean the most to us. So far that’s all pretty dark and dreary, but you most know that without struggle there wouldn’t be triumph – and I’ll be getting to that part soon.

If we look to Scripture, Matthew 19:29-30 says: “And everyone that hath forsaken houses, or brethren, or sisters, or father, or mother, or wife, or children, or lands for my name’s sake shall receive an hundredfold, and shall inherit everlasting life. But many that are first, shall be last; and the last shall be first.” (KJV) Of all the ways in which I am like my father the one thing that I often fail to be, or to see in him, is the servant. The whole story of my father’s life, in fact, is a story of sacrifice. He gave up many of the dreams he had, gave up being around to see my sisters and I grow up, gave up his voice, his health, much of his life and all that he had in it, really. He did all this in order to insure that my mother, my sisters and I would have the best lives possible. Even when he had perhaps given too much and his body began to fail him; when he should’ve call in his favors and finally begun to take, he still insisted in giving. Always giving. More than one person has come to me these past few weeks with stories of his selfless charity, right up to this last days here. In the end everything my father did was to the benefit of those around him, although the burden sometimes wore him down, he always stood upright again and carried on.

For the past few months, since I accepted Jesus into my life and my heart, I’ve been searching for the right path to come closer to God. Now I know that it has been staring me in the face my whole life. My father walked in Christ more naturally and easily than any person I know. He was the servant Jesus calls us each to be. He put himself last in this life, and God will surely put him first in the next. I couldn’t be more proud to him my father, and you can be sure that I’ll be running ahead on the path he forged trying to catch him up so I can say “thank you” and ” I love you.” 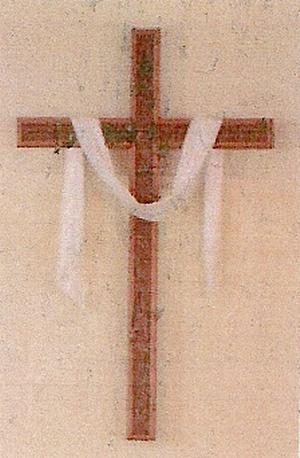 Peter Etcheto carved the cross in our sanctuary. 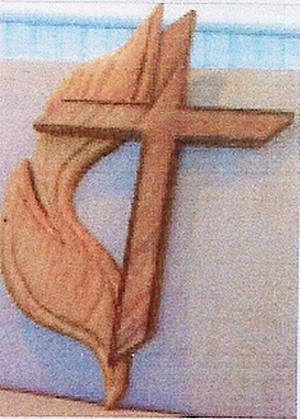 The cross and flame, the logo of The United Methodist Church, that Peter Etcheto carved for Rev. Sanford from wood salvaged from the balcony. Another one of Peter’s cross and flame carving from the same wood hangs in our sister church in Cochabama, Boliva.

Peter also created the rails of the balcony that he restored in our sanctuary.

This song was written by my father when my grandmother passed away. My dad is gone now as well, and I have been planning on making this tribute for some time. Thanks to Mike Harrison’s talent and generosity I was able to realize it in just the way I’d hoped. It is dedicated not only to my father, mother and grandmothers, but to all the mothers in my life, and all mothers everywhere. Thanks for listening, and spread the love!