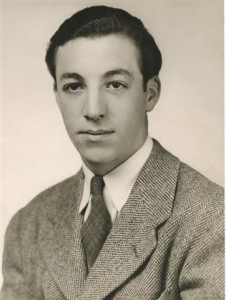 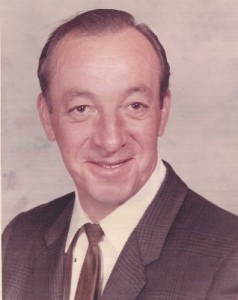 John graduated from Turlock Union High School in 1940, and earned a degree in Business Administration at the University of Nevada, Reno in 1956. He also served several years with the Army Air Corps in World War II. During college he was an active member of the SAE fraternity and sang with the SAE Song Team and the University Singers.

The son of Basque immigrants, John was the last surviving member of his first American born generation. He was given his nick name “Buzz” by his mother Matilda, because of the sounds he made when he was a baby. John was proceeded in death by his parents, Joseph and Matilda, his stepmother Marie Gascue, brothers Peter, Raymond, and James, sisters Marie, Francis Sejas, and June Tanner, and nephew Douglas Tanner.

A memorial service will be held at the Santa Fe Hotel on Lake Street, March 22, at 4pm.

Buzz was born November 21, 1922 to Joseph and Matilda Etcheto of Manteca California. He was the fourth child and joined older brothers Peter, and Raymond and Sister Francis. His nick name reportedly came from a sound he made as a baby. His mother and another brother died in child birth when Buzz was about two years old. Joseph sent to France for a housekeeper, Marie Arrambide whom he subsequently married. That is how the wonderful lady we knew as Mom Gascue came to bless this family.

Joseph and Marie had three more children, June, Jimmy, who died as a young adult, and a daughter Marie who died in childhood. After Joseph and Marie divorced, Marie married Dominic Gascue and had their son John. Buzz graduated from the eighth grade in Manteca and high school in the 1940 class of Turlock High School. He left behind several Manteca High School year books with evidence that he maintained close contact with his grammar school friends.

When his primary family fell apart, Buzz remained in Turlock. We believe that some of this time he spent living with Joseph’s sister Jeanne and her husband Pierre Longis. I discovered a number of letters of reference from the early 40’s as well as certification of Jeanne Longis being designated as Buzz’s legal guardian in 1942. Buzz worked in Turlock for JC Penny’s and United Theaters. He joined the Army Air Corps in 1942 and achieved the rank of sergeant.

After the war Buzz enrolled at the University of Nevada, Reno (UNR) where he studied business administration and music. Working and social activities may have contributed to a slower than average educational process. Buzz was very active in the SAE fraternity. He served as that organizations President during the 100th anniversary celebration. Buzz also used his musical talents on behalf of the SAE song team which won numerous awards. He was a member of the UNR University Singers serving as President of that group. He was also active in Sagers, a UNR service club, the Mask and Dagger Club of the UNR Drama Dept. as well as being an assistant yell leader.

After Graduation, in 1956, he put his business skills to use working for a variety of Reno businesses, including the Standard Oil Co. of Calif, the Club Cal-Neva, and Harrahs. Correspondence indicated that during this period he pursued an appointment to the United Stated Foreign Service. He was unsuccessful due to being over the maximum age limit.

In 1960, Buzz returned to UNR in pursuit of teacher training. After student teaching at Reno High School he received a Nevada Teaching Certificate for Business Education, Social Studies, and Music. During the 62-63 school year he taught at Central Jr. High in Reno. For the next 5 years he worked at Lassen High School in Susanville California. He was year book advisor and worked with the Typing Club. This group was very active in community service. A newspaper article and picture document4ed a large Christmas party the Typing Club put on for under-privileged children. Buzz was also active in the Susanville chapter of the VFW.

After a year at the Gabbs High School, Buzz spent two years teaching typing and business classes at Carlin High School. He again served as year book and student newspaper advisor. He and his students participated in a national year book competition sponsored by Columbia University and were awarded a 3rd place out of 1512 school yearbooks in the 1000 or under division. While in Carlin he was also active in the VFW, American Legion, and the Lions Club. One of his Carlin students later recounted how Buzz had made numerous phone calls to secure her a summer position with the Elko newspaper. Year book comments and thank you notes from this period acknowledged some kindness or extra effort Buzz expended on behalf of his students.

In 1973 and 74 Buzz taught in the Australian city of Ballarat. Ballarat was a gold mining boom town much like those in Nevada where he taught. While in Ballarat, Buzz received a gift of a book on Australia. The inscription in the book read, “Good on yer mate, you’ll make a fair dinkum yet.” Fair dinkum is loosely translated to mean real or genuine. There was a newspaper article from the Ballarat paper about the possible loss of the swimming class Buzz was helping to teach, if he had returned to the states. Buzz taught at Austin High School after his return to the USA.

For the last couple of decades Buzz was back here in Reno living at the Santa Fe Hotel. My memories of Buzz are sitting here on a bar stool smoking and having a drink. He loved to watch his Giants play baseball and was always ready with a hardy laugh. On behalf of the Etcheto family, I want to express our thanks to the Zubliaga family and staff of the Santa Fe for taking such good and patient care of Buzz in his last days even when Buzz didn’t want to be cared for. It is fascinating for me to see a much different picture of Buzz. To see a man active in teaching and community service groups. To see a man making a difference in the lives of his students and in his community. As I remember Buzz, I am encouraged to do good in my life, to eat, drink and enjoy the good things in all my labor.

– By nephew John Etcheto, spoken during the Memorial Service for Buzz at the Santa Fe Hotel, Reno Nevada, March 22, 2003