“A young man who is taking an active part in the business life and building up of Turlock is Joseph Etcheto, who was born in Ustarits, Basses-Pyrenees, France, April 15, 1890. He was reared on a farm until the age of fourteen, when he was apprenticed at the baker’s trade, continuing for three years in the city of Bayonne, ten miles from his old home. Having a longing to try his fortune in the lands of the Stars and Stripes, particularly in California, on account of the favorable reports he had heard, Mr. Etcheto’s desire was accomplished in March, 1908, when he arrived in Stockton.” 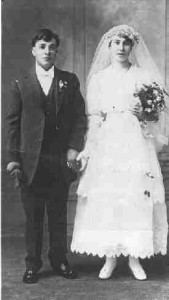 “In 1916, Mr. Etcheto moved to 116 South Center Street, where he built up a large patronage and did a very successful business, turning out a splendid line of bakery goods. In 1920 he erected a new brick building at 315-317 East Main Street on a valuable lot he had purchased there, and there he installed the latest and most up-to-date methods for a modern bakery, with a capacity of 10,000 loaves a day to meet the demands of Turlock and vicinity. His goods are all retailed in his store, which is well equipped with beautiful fixtures for displaying bakery goods and confectionery. He built the residence he occupies at 332 Elm Street and owns the residence adjoining.”

“In Turlock, July 16, 1916, occurred the marriage of Mr. Etcheto and Mathilda Erreca. She is a native of Buenos Ayres, Argentine Republic, South America, but of French parentage. Coming to Stockton in 1916, it was in the land of sunshine and flowers that she met Mr. Etcheto, the acquaintance resulting in their marriage. This union has been blessed with three children: Pierre Joseph, Raymond and Frances. Fraternally, Mr. Etcheto is a member of the Woodmen of the World. He is enterprising, progressive, and willingly assists all movements for the upbuilding of his adopted city and is an active member of the Turlock Board of Trade.”

From the Ellis Island web site; Joseph sailed from Le Havre, Seine-Inferior, France on the 30th of March, 1908, at the age of 18, on the steamship “La Gascogne.” 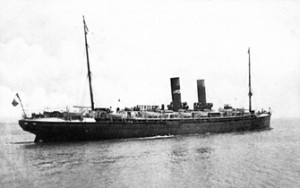 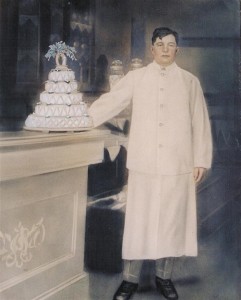 A painting of Joseph 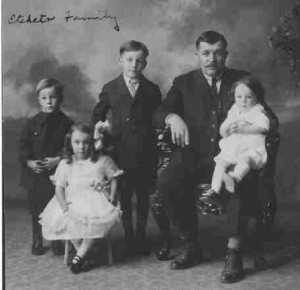 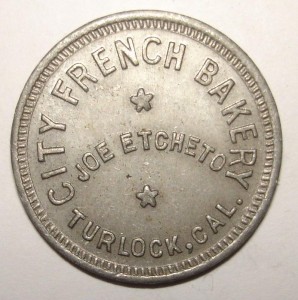 Matilda, died in 1924 while giving birth to their fifth child, Bertrand, who also died a few days later. Joseph sent a letter to France requesting a house keeper, Marie Arrambide whom he later married. This marriage produced three children, June, James, and Marie.

During the depression, Joseph lost everything that he had worked so hard to build up. Unfortunately, the strain was too great and he had to be institutionalized. The family was broken up and Marie later remarried Dominique Gascue. They had a son, John Gascue.

Joseph passed away October 30, 1973, at Southgate Convalescent Home in Sacramento, California, USA, at the age of 83. There is a story that when it was found out that Joseph was a baker by trade, they put him to work baking for the other patients at the sanitarium. 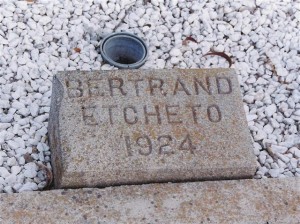 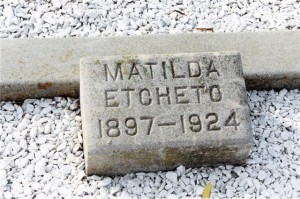